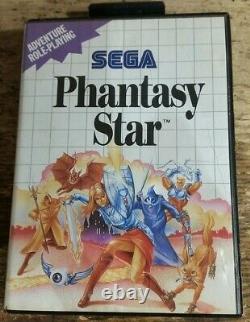 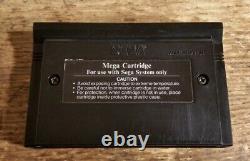 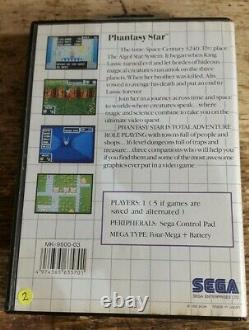 This listing is for an authentic copy of Phantasy Star on the Sega Master System (box & cartridge). Please note that the manual is not included. The item is in good overall condition. Please note that there are a couple of small tears to the plastic box wrapping and edges of the cover artwork beneath along the top and bottom near the spine.

There is also some minor scratches to the outer box consistent with general wear. The cartridge label and casing is in good condition with only light superficial wear and minor abrasion along the label edging. The item has been tested to confirm that it is working correctly.

Phantasy Star is set on the planet Palma, one of the three known planets in the Algo Star System, located deep in the Andromeda galaxy. The game takes place in the Phantasy Star time of Space Century 342. Two hundred years earlier, space travel had been discovered, allowing for the colonization of two other planets in the galaxy, Motavia and Dezoris.

Now, life was good under the rule of King Lassic and citizens were provided with everything that they could want. Unfortunately, this peace and prosperity did not last. The first change began with a new religion that was rumored to have come from another galaxy.

The dark priests of this new religion, though never actually seen by mortal man, supposedly promised immortality to any who would join their cause. King Lassic was getting old and the idea of living forever appealed to him. He became the first to join this new religion. Soon after, he was changed. The change started with a horrific suit of armor that the priests made for him.

Next, the dead began to rise, striking fear in the hearts of everyone. King Lassic had become an evil tyrant, due to the black magic of this new religion.

Where there is evil, there is also good. People began rallying in secret against the evil king. But Lassic's Robotcops were deadly in hunting down these rebellious defenders. As heroic protagonist Alis, your brother has been killed by these Robotcops, but before he died, he left his sword and quest to you. Raising the sword to the sky, you accept the quest of your fallen brother.

The item "Phantasy Star Sega Master System Cartridge & Box Pal UK Good Condition" is in sale since Tuesday, June 23, 2020. This item is in the category "Video Games & Consoles\Video Games". The seller is "burningshield" and is located in Northwood.